Who votes for the US president?

Home/Blog/Who votes for the US president?

Who votes for the US president? 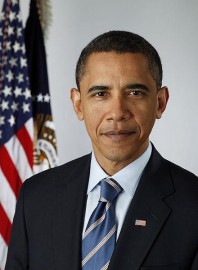 Barack Obama - who voted for him?

This blog has reported previously on the American presidential election system and the way it represents the country unevenly, by starting the primary process in one small town in Iowa.  There is controversy between California and Nevada about another uneven aspect, the way that the electoral college system turns the popular vote into votes for the president.

The president of the United States is elected not by the American people as such, when they cast their votes every four years, but by an electoral college, which is the body actually elected by voters.  In practice, it normally amounts to the same thing: the electoral college is these days a formality, its members pledged to support a particular candidate and chosen as a mark of recognition for years of loyal service to their own particular party.

There are occasions when the winner in the electoral college is not the winner in the popular vote – the Bush/Gore election of 2000 is the most notorious recent example – a phenomenon discussed on this blog here (in the context of the UK referendum on AV).  This occurs because all the electoral college votes in each state are allocated to the winner of that state, on a First Past The Post basis.  (There are only a couple of small state exceptions to this.)

California is the largest state in the union, with 55 votes out of the total of 538.  They all go to the candidate who wins in that state, making it quite a prize.  However, California is a strongly Democrat state where the Republicans have no chance of winning and therefore do not try.  Neither side spends much money or time campaigning in the state, preferring to concentrate on marginal states elsewhere.  (This is, or rather should have been, one of the arguments against FPTP.) 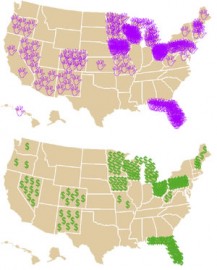 These maps show the amount of attention given to each state by the Bush and Kerry campaigns during the final five weeks of the 2004 election. At the top, each waving hand represents a visit from a presidential or vice-presidential candidate during the final five weeks. At the bottom, each dollar sign represents one million dollars spent on TV advertising by the campaigns during the same time period (picture Wikipedia)

The graphic to the right shows where candidates devote their efforts: California barely figures (it went Democrat in 2008 by a 24 per cent margin), nor do Texas (38 votes, 12 per cent margin for the Republicans) nor New York (29 votes, 27 per cent Democrat margin).  Much more time and money is spent in Nevada (5 votes) than in California (with eleven times as many).  This is uneven.

Politicians in California want to change the system so that campaigning takes place more evenly across the country, which would give Californians more influence in the overall outcome rather than being taken for granted.  Their proposal is that the electoral college should be abolished and replaced simply by a direct election for president.  That way, the decision of each voter how to vote would be equally worth campaigning for: at present, it matters much less which way an individual in Hawaii decides to vote (45 per cent margin for the Democrats) than a voter in North Carolina (0.33 per cent).

How is this taken in Nevada?  At present, because Nevada is much more closely fought than California, it gets much more political attention, even though it is much smaller.  As one might expect, this makes the proposal not popular.  The Nevadans like their disproportionate claim on national attention.

But there is a solution from Nevada.  Rather than changing the whole national system, the Californians could simply make a change themselves.  Either they could allocate their own electoral college votes to the candidates in proportion to the votes cast, or they could allocate them on a FPTP basis to the winner of the popular vote in each congressional district.  That way, California would become more competitive and thus more likely to attract national campaigning, without forcing other states to change, too.

Of course, this Nevadan suggestion should not be taken entirely at face value.  California is strongly Democrat, while Nevada is not, and the Nevadan suggestion would give the Republicans some of the electoral college votes currently sewn up by the Democrats.

When it comes to constitutional proposals, abstract notions of constitutional propriety and partisan hopes for political advantage are inseparable.  It is impossible to demonstrate that any idea is motivated solely by the former and not at all by the latter.  The Republicans in Nevada would like to chip away at the Democrat grip on California; the Democrats would like to reduce the disproportionate influence of small, rural states that vote Republican.  Even if either of them had motives that were pure, they could never prove it.

Constitutional issues are studied by academics separately from the day-to-day grubby business of politics, but in fact the two can never quite be distinguished.  Perhaps this is a lesson for the purists on all sides.