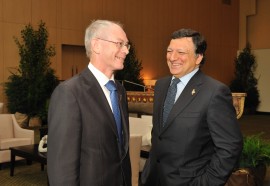 There is a delightful power struggle going on within the EU institutions.  The twin presidents of the European Commission and European Council are tussling for the role of leader of the EU.  (We foresaw this in our paper to the European Convention back in March 2003, which you can read here.)

Today, in the next round of the in-fighting, Jose Manuel Barroso, president of the European Commission, will give his first ever “State of the Union” speech.  The president of the United States gives such a speech every year – President Barroso speaks regularly to the European Parliament, and the only surprise is that it has taken this long in Europe for him to adopt the same title.

Trying to build up the occasion even more, thought was given to compelling MEPs to attend and listen to the speech on pain of being fined.  Fortunately, reports EUObserver, that ridiculous idea has been shelved: if MEPs complain that they are important enough to be allowed to choose their own meeting location (they prefer Brussels to Strasbourg), then they ought to be capable of deciding whether or not to attend a plenary session.

President Barroso has set himself up for a challenge.  American presidents traditionally declare during the State of the Union speech that “The state of our union is strong!”  Will Mr Barroso dare do the same?