Why do people vote?

Why do people vote? 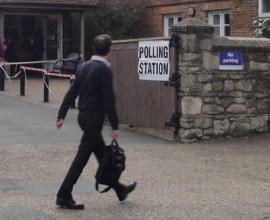 Going to vote – what does this man think he’s doing?

The theory that underpins modern economics is the idea that people act rationally.  Their actions will be based on an analysis of the information available to them and they will then act in a manner that maximises their own benefit.

If that is so, how to explain voting behaviour?  Not the decision about which party to vote for, that’s easy, but why to vote at all.  Is the time it takes to go to the polling station and vote justified by the benefit that will accrue as a result?

In the last UK general election, more than 29 million people thought that it was worthwhile.  But of the 649 seats nominally at stake in the election, as many as 382 were considered safe seats and thus the result of those was known before the campaign even started.  Among the remaining 267 marginal seats, the smallest majority in any of them was 4.  Not a single voter could have changed the outcome in any seat by the act of voting.

And even if there was a seat that could be changed by a single voter, there are 649 seats to be contested.  There has been no outcome to a British general election that would have been different if one seat had been won differently.

Against that hopeless mathematics, why vote?

The reason is, goes the best theory, that people don’t only vote in order to have an effect on the outcome of the election, but also to have an effect on themselves.  To vote is to express an identity.  I’m the kind of person who votes Liberal Democrat, I might tell myself, in which case I go and vote Liberal Democrat when the election comes round.  My vote doesn’t necessarily indicate any particular sympathy for the present Liberal Democrat party and its policies and habits.  This theory explains quite a lot.

First, there is the decline in general election turnouts.  The chart below shows how turnout has been on a steady downward trend since the second world war, most notably declining in the past 15 years or so.

If one of the main reasons for voting in the European elections is weaker than it was, what can replace it?  This is where the idea of nominating party candidates for president of the European Commission comes in.

Abstention signifies not opposition to the EU as such – there are political parties to vote for if that’s what you think – but the sense that the political choices on offer are no longer relevant to daily life.  The way to deal with this is to take the most important political choice – who should govern – and invite the voters to decide.

To keep the choice of Commission president in the hands of the narrow group of the connected and powerful removes from the European elections one of the main purposes of any election.  Encouraging people simply to vote “for Europe” is not enough.  People increasingly do not feel that way and keeping the crucial decisions out of their hands will make them feel that way even less.