Why does the government employ lawyers?

Home/Blog/Why does the government employ lawyers?

Why does the government employ lawyers? 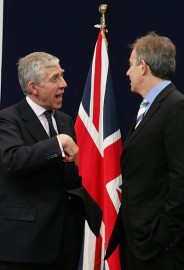 The Chilcot inquiry’s encounter with Jack Straw is turning up yet more gems. Jack Straw was foreign secretary at the time of the invasion of Iraq and the inquiry into British government decision-making has revealed this comment from him in response to legal advice that UN Security Council resolution 1441 was insufficient justification for war.

He starts: “I note your advice, but I do not accept it.” He goes on: “I am committed as anyone to international law and its obligations, but it is an uncertain field. There is no international court for resolving such questions in the manner of a domestic court. Moreover, in this case, the issue is an arguable one, capable of honestly and reasonably held differences of view. I hope (for political reasons) we can get a second Resolution. But there is a strong case to be made that UNSCR 687, and everything which has happened since (assuming that Iraq continues not to comply), provides a sufficient basis in international law to justify military action.”

He is responding to legal advice not only that a second resolution was necessary but that this requirement was clear and not, as he supposed, arguable. (Read it here.) What is the point of having lawyers if what they can say can be waved away so lightly if it turns out to be inconvenient?

Jack Straw explains his thinking in a further note to the Attorney General dated 6 February 2003:

“I have been very forcefully struck by a paradox in the culture of government lawyers, which is that the less certain the law is, the more certain in their views they become. … On the one hand, in well-rehearsed areas of domestic law the advice I am offered has usually been acute, but also admitted to a range of possibilities. On the other hand, in issues of international law, my experience is of advice which is more dogmatic, even though the range of reasonable interpretations is almost always greater than in respect of domestic law.”

What does a lawyer do? It is to advise a client of how behave in view of what the law says. Where the law is unclear, as it often is, it is to advise of risks and possibilities: “Do X, and you are 90 per cent certain to be all right, do Y and you will be 95 per cent certain, but you will need to do Z if you want to be completely sure.” The client may think that the extra cost of doing Z is not justified and is willing to do Y with the 5 per cent risk of being found in the wrong and bearing the costs that result. That is how litigation works.

But the issue of whether or not the war in Iraq was compatible with international law goes beyond litigation. An aggressive war conducted outside the authority of the United Nations risks being treated not as an administrative error but as a crime. The idea that government ministers could ask for a range of recommendations and then choose a potentially (in fact, on the advice of his lawyers, almost certainly) criminal one is quite hard to accept. But this is what Jack Straw appears to have done.

Sir Michael Wood, who drafted the legal advice with which Jack Straw disagreed, said to the enquiry: “Obviously there are some areas of international law that can be quite uncertain. This however turned exclusively on the interpretation of a specific text and it is one on which I think that international law was pretty clear.”

Furthermore, he reacts in an entirely different way to the absence of an international court. Jack Straw thought that it meant that one could be less precise, while Sir Michael thinks the opposite: “Because there is no court, the legal adviser and those taking decisions based on the legal advice have to be more scrupulous in adhering to the law.”

What is a federalist to make of this? As I have remarked before, federalism is founded on the idea that the rule of law should apply to states as well as within them, but also that the rule of law must be legitimate. International treaties, among the signatories of which are countries that are not democracies, do not have the same legitimacy as domestic law produced as the result of democratic politics, but that does not make them entirely illegitimate. This is partly what makes international law, in Jack Straw’s words, “an uncertain field”.

But federalism proposes not to exploit this uncertainty but to end it. The legitimacy of the rule of international law needs to be strengthened, not undermined. If someone like Jack Straw, who styles himself as being “committed as anyone to international law and its obligations”, feels free to duck away from its more awkward implications, what is to be expected of politicians who have reputations of caring even less for principle and more for expediency than Mr Straw?

There is a further interesting point that arose from the evidence published today regarding not international law but the British constitution. It follows on from the notion that there is no international court to reach decisions. Instead, the Attorney General has been treated as the final arbiter on this matter. Because he said that the war was legal, that means that it was. But who is the Attorney General? He may be a lawyer, but he is a political appointee of the government. The idea that the legality of a politically controversial matter can be settled beyond doubt by somebody who is in a partisan position makes no sense. It shows that, whatever the flaws in interpreting and applying law internationally, there are serious flaws in the British legal and political system too.

It should be established that the role of the Attorney General is to present advice to the government of the “90 per cent, 95 per cent, 100 per cent” variety but not to be the final judge. One conclusion from the Chilcot enquiry must surely be that this confusion of roles within the British political and legal system surely cannot go on. The final arbiter of the law cannot be a political figure.

¤ ¤ ¤
It is revealed by another note published today that Jack Straw actually intervened to prevent the Attorney General from outlining the range of opinions and instead to offer a single settled view. Compare this to his insistence on 20 February 2003 that “As far as the implementation of Iraq UNSCs is concerned, this is an uncertain area of law. The US, Netherlands and Australian government legal advisers all, I understand, take the view that SCR 1441 provides legal sanction for military operations. The full range of views ought to be reflected in the advice offered by our Legal Advisers.” The Attorney General was told not to reflect the full range of views in his advice, thank you very much.