Why is the constitutional treaty so long and complicated?

Home/Blog, Europe/Why is the constitutional treaty so long and complicated?

Why is the constitutional treaty so long and complicated? 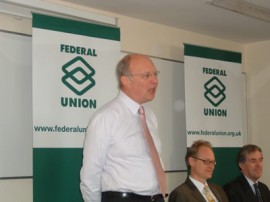 A very interesting seminar today on the future of the constitutional treaty. A full report will follow soon in the news section of the website, but here are some quick reactions.

The basic debate was between Andrew Duff MEP and Wayne David MP, each a deeply profound pro-European with a clear insight into the needs and demands of European politics. What made the debate work was the very different conclusions they had reached: Andrew introduced his Plan B (read more about it here) which aimed to revitalise the constitutional process by addressing public and popular concerns about the text of the treaty; Wayne’s view was that any kind of treaty was more than public opinion could stand and that we should think instead of practical reforms that would make a visible difference. 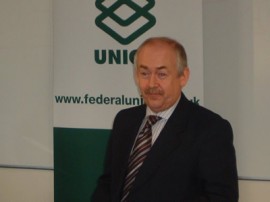 In the terminology of Four routes to the new Europe, which you can read here  0611PolicyCommentary, Andrew is proposing route 3 and Wayne route 1.

Michael Siebert, from the political section of the German embassy, explained the background and was very clear on some of the obstacles facing the constitution but was also clear on the political support that lay behind it. Neither Wayne nor Andrew could have been entirely happy about the picture he painted.

One question came up that needs an answer here. Why can’t there be a simpler text? The current treaty is far too long and complicated: would not clarity be preferable?

The immediate answer is yes, of course, but one needs to think where the complications come from. The starting point is a clear, simple proposal, but no plan survives contact with the enemy. As soon as the member states see a clear, simple proposal, they start to propose small amendments that might suit them better. Opt-outs emerge, exceptions are introduced, variations worm their way into the text. No-one does this because complication is itself a value, they do it because complication is worth tolerating in the name of a slightly more favourable set of rules. 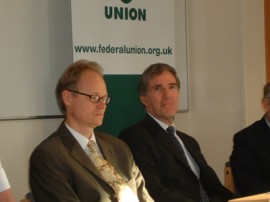 The end result of everyone insisting on their own amendments is that clarity is lost. A student essay has a word limit – new material can be introduced but only at the expense of something that has already been included. The question is not “do I want to include this” but “do I want to include this in place of something else”. Member states are faced only with the first question, and because the text has to be agreed by unanimity, each amendment is forced on all the other member states, too. If they object, there might be an argument, but often they will think that it is not worth the argument because they might need the support of the particular member state over something else.

This means that, left to the current negotiations, the text will grow and grow. Even though everyone sincerely wants a clear and simple text, the methods used do not allow it to arise.

A clear and simple text will come from a common understanding among the member states of what the European Union is for and how it should function. Complications in the text indicate the absence of such a common understanding. The length and difficulty of the text is a symptom of a wider problem, rather than simply a problem in itself.