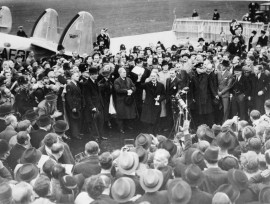 Today is the 75th anniversary of the Munich agreement, when British prime minister Neville Chamberlain and his French opposite number Eduoard Daladier met German dictator Adolf Hitler and Italian fascist leader Benito Mussolini to settle the fate of Czechoslovakia.  Chamberlain thought he had come away with an agreement for peace in our time; in fact, there was war within 12 months.

It’s an important anniversary for Federal Union because it was the travesty of this agreement that spurred our founders to get started.  Peace will not be assured by agreement between opposing armed camps, they thought, but by a mutual renunciation by states of the power to make war.  Charles Kimber, one of the three original members, wrote about the fears and determination of those days here.

This website has also published an account here of the politics and manoeuvres that enabled Chamberlain to get to Munich, past a suspicious opposition both in the House of Commons and in the cabinet.  His methods included:

The echoes in more recent times are surely unmistakeable.  Read about them here.

The debate in the House of Commons on 3 October 1938 on the Munich agreement can be read here.

Charles Kimber’s memoirs have just been published.  An appreciation will appear on this website shortly.