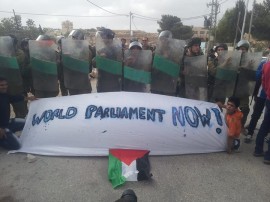 Demonstrators near Bethlehem on the West Bank

* As UN democratic legitimacy shattered – people take to the streets in 27 countries. 1000 Parliamentarians worldwide as well as UN Independent expert on the subject Alfred de Zayas call for a World Parliamentary Assembly.

During a week of internationally coordinated action ending today, in 27 countries, six continents, and 54 cities, activists took actions to highlight the undemocratic nature of the United Nations, and call for a world parliament. As governments and observers increasingly criticize the UN System as “undemocratic” and “unjust”, and as UN Human Rights Council appoints an independent expert on promotion of a “democratic international order”, worldwide network of activists organised the first such bottom-up week of action for a world parliament. Thousands of lawmakers, politicians and NGOs have joined in calling for establishment of a world parliamentary assembly. In callout, organisers stress that “the world’s citizens should vote for their world representatives”. Global activities included demonstrations, banner actions, provocative social networks videos (see here), as well as public meetings and an event in the European Parliament sponsored by cross party group of European MPs.

This is the first Week of Action for a World Parliament, which organizers plan to make an annual event. Actions took place in 54 cities worldwide, including for example in India, Germany, Uganda, Japan, Argentina, Palestine, Brazil, UK, Dubai, Israel, Italy, Australia and Belgium, as well as on social networks. In Brussels, organizers held an event in the European Parliament, sponsored by European lawmakers from the four main parliamentary groups and joined by UN Expert Alfred de Zayas (see picture). In Palestine, 70 Israelis, Palestinians and internationals were blocked by soldiers after marching near Bethlehem in the West Bank holding a “World Parliament Now” signs (see pictures here and here). In Berlin, activists set up an installation near the wall that once divided the city and the continent (see picture). In India, dozens of activists participated in a banner action (see picture). On the Facebook page, organizers release videos and pictures from world-wide actions. In their callout for the Week of Action, activists explain that “world’s citizens should vote for their world representatives.”, and that “Today, the world’s citizens have little influence on decisions taken at institutions such as the UN, the IMF, the WTO, the World Bank, the G20 or the G8.”. The official Facebook page could be accessed at: https://www.facebook.com/worldparliamentnow

While this is the first grassroots-oriented international action, the idea of a UN Parliament has received significant political support in recent years – by politicians, parliaments and civil society [3]. The European, African, Latin-American, Swiss, Argentinian parliaments have all supported the creation of a UN Parliamentary Assembly in recent years. More than a 1,000 Parliament Members world wide, from above 100 countries have signed an appeal in support of a UN Parliamentary Assembly. Distinct individual supporters include former UN Secretary General Boutros Boutros-Ghali, Gunter Grass and Lech Walesa, and Mike Moore, former Director-General of the World Trade Organization. Some of the organizations which have led the coalitions for the creation of the International Criminal Court and the European Parliament have also aligned behind the initiative. During the week of action, UN Independent Expert on the Promotion of Equitable International Order, Alfred de Zayas released a press release titled “time for a World Parliamentary Assembly”. Historically – the idea of a world parliament has been supported by individuals such as Albert Einstein, US President Harry Truman and writers Albert Camus and Thomas Mann.

Full text of the Week of Action callout:

If you feel that our current political system is inadequate to deal with growing global challenges, you are not alone! Join our week of action on October 17-24 to call for the establishment of a World Parliament that will give real representation to all citizens.

As global crises increase, people across the world, from diverse backgrounds and cultures, express their discontent with existing forms of political representation, which leave them voiceless in global decision-making.

We have many, many global problems. From the wrecking of our life-supporting ecosystems to the failure to protect human rights, incomplete nuclear disarmament, lack of regulation of global markets and financial systems, to overcoming socio-economic inequalities – these and many others are all global problems that require global solutions. But who is accountable for dealing with these problems from a truly global perspective?

In order to create global solutions we need a global political body that can facilitate global democratic discussions and take global decisions. Today, the world’s citizens have little influence on decisions taken at institutions such as the UN, the IMF, the WTO, the World Bank, the G20 or the G8. The governments represented in these bodies – bodies frequently made up by a small self-selected group – meet and decide our future, while often being influenced heavily by the lobbyists of global corporations. The primary concern of these governments is to defend what they consider to be in their national interests and not the common good of humanity and the environment.

Who should speak for the people of the world? The people should decide for themselves!

In a democratic order, citizens already elect representatives at multiple levels. There are city councils, provincial or state parliaments and national parliaments. In Europe there’s even a continental parliament. And yet for global matters that affect each and every person on the planet, there exists no elected world parliament.

A world parliament would be an instrument to find and implement solutions that are democratic, accountable and serve the best interest of humanity. It would reflect the social, political, religious, ethnical, and cultural variety of all the world’s citizens, transcending national boundaries.

We, the participants in this week of action, agree on the fundamental idea that the world’s citizens should vote for their world representatives. There are many different ideas about how a world parliament could function. Some of us believe that it should be enhanced with mechanisms allowing electronic and direct citizens participation. Yet, we are united in diversity, and united in our call:

Let the people decide. We need democracy without borders. We need to build global democracy. We need a world parliament!

We call on individuals, organizations, groups and movements everywhere to organize and join us during the first Global Week of Action for a World Parliament, taking place from 17-24 October. Come and speak up for global democracy!

A list of featured supporters is accessible here: http://en.unpacampaign.org/appeal/support/ini_all_0.php