Are all voters equal?

Are all voters equal? 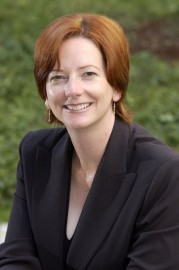 Julia Gillard, attempting to be returned as Australian prime minister

One of the basic tenets of federalism is that all citizens should be equal.  People living in different member states within a federation might have different rights and duties with respect to those states, but they have equal rights and duties with respect to the federation.  This insistence on equality among the citizens is one of the ways of characterising the difference between a federation and a confederation, and is a reason why democratic states cannot share a federation with undemocratic ones: democracy at the federal level must be practised freely and equally throughout the federation, uninhibited by the actions of the governments of the member states.

This aspect of the theory of federalism is relevant to the debate about electoral reform in the UK, with the proposal to move from First Past The Post (FPTP) to the Alternative Vote (AV) for the election of members of the House of Commons.

Both systems are based on single-member constituencies, the difference being that under FPTP the voter indicates a single choice, while AV permits the voter to list all the candidates in order of preference.  The least popular candidate is eliminated from the election first, and the votes are transferred to the voters’ second choices.  This procedure continues until one of the candidates has more than 50 per cent of the votes cast, either as first preferences or as transfers.

A feature of both electoral systems is the safe seat.  These are constituencies where one political party is so obviously dominant that it is certain to win the seat without any campaigning.  The voters who live in such a seat are effectively deprived of choice over how they are to be represented in parliament, and their votes do not determine the result of the election.  A few votes more or less in a marginal seat are much more likely to influence the results than the same number of votes in a safe seat, so electoral activity is concentrated in the marginal seats where the result could be influenced by the campaign.

It is evident that the contrast between safe seats and marginal seats does not treat all voters equally and thus is in conflict with the principle that all citizens should have equal rights regardless of where they live.

In practice, this matters because political parties tailor their policies to be persuasive in the marginal seats rather than in the safe seats.  It is often argued that the rise of BNP in working class communities can be put down to the neglect of the people in those areas by the Labour party, because it took their votes for granted and designed its policies to be attractive elsewhere.  If all votes mattered equally, this kind of problem would not arise.

Furthermore, connoisseurs of the expenses scandal might comment on how many of the errant MPs held safe seats rather than marginal ones.  Fear of the electorate is a corrective to complacency.

In the UK, it is a substantial factor in the election.  Earlier this year, in the run-up to the general election, the Electoral Reform Society published research claiming that as many as 382 seats were “‘Super Safe’ in that they will not change hands even with a landslide on any conceivable scale.”  The concentration of such seats in a region could reduce the influence of that region within national politics: in fact, the ERS noted:

“Whole counties such as Cambridgeshire, North Humberside and Northumberland have literally no competitive elections. In many cases a solitary seat is the only area competition such as Surrey, West Sussex, County Durham, Lincolnshire and South Yorkshire.”

So, what is the difference between FPTP and AV when it comes to safe seats?  We can compare the UK with Australia, which uses AV.  I have not seen any analysis of Australia along the same lines as the ERS analysis of Britain (although the ERS might be well-advised to undertake it) but one can look at how many seats actually change hands at each election.  This gives another measure of how safe seats are in practice.

The chart below shows the relationship between a change in vote share between government and opposition and the net number of seats that change hands as a result, over the past 12 elections.

Change in vote share vs change in seats, UK and Australia

(Two health warnings about this chart: (1) the change in vote share in Australia relates only to first preference votes, whereas it might be a change in second or lower preferences than makes the difference in the election, and (2) it does not include seats that changed hands against the national swing, so the number of seats changing hands might in fact be greater.  Furthermore, this analysis does not distinguish between seats that did not change hands because they were successfully defended and those where there was no real challenge at all.)

In the chart, British election results are largely above and to the left of the Australian results, because fewer seats change hands for any given change in votes.  The circled mark indicates the average result for each country (UK: 8.9% seats, 5.7% votes; Australia: 10.6% seats, 2.9% votes).  The lower average swing in Australia is consistent with health warning (1) above, but the greater proportion of the seats that changes hands – the probability of a seat changing hands is 20 per cent higher in Australia – suggests that AV makes seats more vulnerable and fewer of them safe.

This finding makes intuitive sense.  In Britain, a candidate who gets more than 40% of the vote is likely to win (in only 27 seats out of 650 did the second-placed candidate also get more than 40% of the vote), whereas in Australia, there is the possibility that the other candidates will agree to exchange second preferences amongst themselves to the detriment of the front-runner (which they can do without harming their own electoral bids).

A reduction in the number of safe seats, making more votes matter more, would be a considerable improvement in the electoral system.  A change from FPTP to AV would make a modest difference in this respect, and to that extent can be welcomed.