Stab in the back

Stab in the back 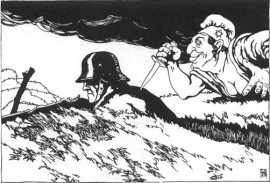 A persistent complaint from the eurosceptics is that the British people were lied to about membership of the EU.  Joining wouldn’t reduce our national sovereignty, we were told, and we are suffering now as a result of this deception.

There are three responses to this.

First, membership of the EU hasn’t reduced our national sovereignty.  The very fact that the UK can talk about leaving proves that.  On a day-to-day basis, sovereignty is pooled rather than wielded individually, but it can always be taken back if we want.

A second argument is that losing national sovereignty does not mean suffering as a result.  National sovereignty is a dangerous weapon in other people’s hands, and relinquishing part of our own is the necessary (and cheap) price to pay in order to get our erstwhile enemies to relinquish part of theirs.

Thirdly, there was no lie.  In the debates about membership, the implications for national sovereignty were spelled out.  (Perhaps not in every statement ever made on the subject, but on enough.)  Here is Edward Heath on 25 April 1975, in the thick of the referendum campaign:

Of course a country, like an individual, can decide to go it alone. And in theory at least, they may appear to have more freedom. But freedom to do what? Free to buy what you want but too poor to afford it. Free to say whatever you like – but too weak for anyone to listen. This is the sovereignty and the freedom that the anti-Marketeers dangle before you but it is a sham sovereignty and a fictional freedom…

Now, these three responses are not completely consistent with one another, but each of them individually, and even more powerfully in combination, responds to the claim of deception.

The story of the great European lie is surely our equivalent of the German stab in the back myth of the 1920s, that the German army had not actually been defeated on the battlefield in the Great War but that a collection of socialists, republicans and Jews had nevertheless conspired to betray their country.  This nasty fiction was one of the tools the Nazis used to ease themselves to power, and its echoes today are unpleasant and alarming.

The European Union has changed a lot since the British voted on membership in a referendum, true, but each change to the treaties  has been approved by our parliament in the same way as every other law or constitutional change has been approved.  By all means, object to British membership if you wish, but we are here through choice and not through cheating.