The end of human rights

The end of human rights 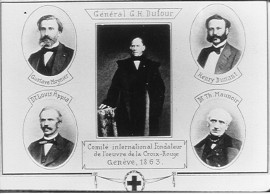 Contemporary illustration showing the five founding members of the International Committee of the Red Cross, around 1863

Things are getting better, no?  Economic growth is back, technology is advancing, life expectancy is rising and infant mortality falling.  Consumption of salt, sugar and saturated fat is in decline.  All good news.

Then Tony Fleming has to go and ruin it by referring me to an article in the Washington Post about the end to 150 years of human rights progress.

Starting with the foundation of the Red Cross in 1863, the world has seen a growing respect for equality and the dignity of the person, regardless of circumstances.  Prisoners, women, children, ethnic minorities: all are treated better.  Even wounded enemy soldiers, people who it is hard to imagine have a smaller claim on our goodwill, are entitled to protection.  (That was why the Red Cross was founded in the first place.)

But that process is now in retreat.  Europe, which was the birthplace of many of these ideas, is now, relatively speaking, in decline.  As a share of the world economy, and as a share of world decision-making, Europe matters for less than it did in the past.  The ability of the Europeans to advance their values is therefore weakened.  (The inability of the Europeans to organise themselves properly to do this makes this weakness all the greater, but this is an inability that this website wants to see fixed.)

America, too, is not the champion of human rights that it might be.  Its economic interests, notably maintaining a good relationship with China, and its security interests, Guantanamo Bay remaining open, militate against this.  And rising powers such as China do not share these ideas to anything like the same extent.

A further characteristic of the modern world is the growth in influence of organised religion.  Religious groups can be remarkably uninterested in the human rights of non-members, as religion becomes increasingly a matter of identity as much as of faith.  The European secular model is under challenge.  This is even true of Christianity: most Christians now live outside Europe and even the Pope is not a European (for the first time since Pope Gregory III in 741 CE).  It is likely that Christian and European values will become increasingly divergent, not to mention the resurgence of Islam and other religions too.

All told, the cosy assumption that the world can unite around the protection of human rights is no longer tenable.  Secular and democratic values are under increasing threat.  Those of us who still believe in those values need to be ready to work a little harder.