States or citizens – the flag reveals all

Home/Blog, World/States or citizens – the flag reveals all

States or citizens – the flag reveals all 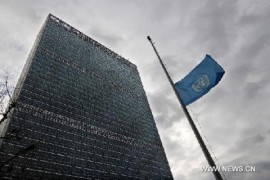 The UN flag at half-mast

I wrote on this blog recently of the United Nations as having the weakness that it represents only states and not peoples.  Here is an example of the consequences of that weakness.

The picture above right shows the UN flag outside the United Nations headquarters in New York, flying at half-mast to mark the death of Kim Jong-il, president of North Korea.  (H/T Guido Fawkes)  The fact that he was a murderous dictator and a disgusting demagogue is not a reason to withhold this mark of respect, if you are the UN.  An organisation founded purely on the rights of states and not at all on the rights of citizens has no reason to look beyond the national governments of its members.  However bestial their behaviour, they remain equal members of the organisation, claiming equal standing in its decision-making.

While there is an outside chance that the UN will agree to take action against one of its own members, for example against Libya earlier this year, it depends on getting the approval of the Security Council in which five countries have a veto.  Of those five, one is an out-and-out autocracy and another is borderline, and those two have no wish to see democratic ideas and habits spread uncontrollably around the world.  In particular, China and Russia have been protectors and sponsors of North Korea and the regime of Kim Jong-il.

The lowering of that flag in New York is a visual symbol of how inadequate the global institutions really are, because they are based solely on the rights of states and not their citizens.