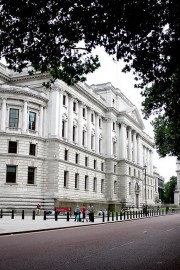 Britain’s public finance is highly centralised by the standards of the European Union and the OECD. The degree to which tax revenue is centralised is far higher here than in Germany, Spain or even France. Council tax accounts for only a fifth of local authority revenue in the UK; the bulk of revenue comes from Treasury grants and centrally collected business rates. Regional authorities, notably the Welsh Assembly and Scottish Parliament, have restricted powers of taxation and must balance the books annually. When in 2001 London’s mayor, Ken Livingstone, suggested floating a bond issue to finance much needed capital expenditure on the London Underground, the notion was immediately shot down by the government as contravening ‘Treasury Rules’. Yet, few people seem to appreciate the extent to which the Treasury’s control over public finance stifles local initiative and frustrates regional autonomy.

It was not always this way. Local councils were once responsible for much of Britain’s service provision in the areas of education, social services and housing. But local government lost many of its powers to central government immediately after the war and has continued to lose influence since. As services expanded in the 1960s and 70s, the Treasury’s responsibility for funding such services grew, as did its control over local authorities. Under Mrs Thatcher and her successors, administration was increasingly turned over to agencies and the use of market efficiency criteria for assessing performance became widespread. Today, not only are local authorities forbidden by law to do anything which is not expressly permitted by parliament, but they have very limited discretion in their ability to raise money, and they are not permitted to exceed central government limits. Loans cannot be taken without express sanction, and the Treasury treats these as part of public sector borrowing (PSB). Central government can make the availability of grants conditional on compliance with its policy.

The Treasury’s reluctance to fund local health, education and social services, combined with the dearth of local and regional financial instruments, is one reason Britain relies increasingly on private capital; i.e. on Private Finance Initiatives (PFIs), which reduces public capital spending today at the cost of burdening services with higher future running costs.

All this is done in the name of maintaining sound public finance. Yet it is hard to find an economic rationale for current policy. The ‘superior private efficiency hypothesis’ – the notion that the private sector always does it best through competition – simply does not stand up to scrutiny when applied to railways, health care, education, the provision of prison services or whatever public good neo-liberals may wish to privatise next. Equally, the great privatisation drive of the 1990s was sold to the public on the grounds that public debt must be reduced and the state streamlined in order to reduce inflation. But the taming of inflation in the past two decades has had far more to do with the supply of cheap manufactures from low-wage countries like China than with pruning budgets.

In low-inflation Britain, manufacturing has been eclipsed by the growth of financial services and new science-based ‘knowledge’ industries. A key enabling factor in their growth is the presence of first-rate economic and social infrastructure, and the highly uneven regional distribution of such infrastructure in the UK is a major determinant of the relentless demographic drift to the southeast.

The over-centralisation of public finance brings other distortions as well. Giving regions and local authorities leeway to borrow is not the same as giving them the right to print money. Just as progressive taxation spreads the burden of finance more equitably between rich and poor, public bond finance spreads the burden more equitably between generations. New York City and Berlin can both issue municipal bonds – but the Federal Reserve Bank of New York cannot print dollars any more than Bundesbank branches in German Länder can print euros.

John Prescott’s refusal to allow London to issue its own municipal bonds had little to do with strengthening public finance and fighting inflation. Prescott’s decision, taken at the behest of Gordon Brown, in effect provided political gravy to the private sector companies vying for 30-year leases. The huge capital cost involved could have been absorbed by fund managers looking for triple-A municipal bonds. Instead, part of the cost was transferred to the private sector who, ironically, issued their own bonds with a public guarantee. Part, too, will ultimately be borne by commuters in the form of the higher fares needed to earn the profit margins guaranteed to private operators under the PPP. In much the same spirit, the costs (and risks) of lottery funded projects from the Millennium Dome to Olympic Stadiums weighs disproportionately on the current income of the typical punter.

It is high time that Britain’s local and regional authorities were released from the straitjacket of ‘Treasury rules’. The burden of public capital expenditure needed to rejuvenate Britain must be shared between large and small savers, between present and future generations and – most particularly – between central and local government. Not only would this be more equitable, it would help reshape Britain’s dangerously top-heavy edifice of political power.

George Irvin is a retired academic economist who is currently Professorial Research Fellow at SOAS, London. His new book, “‘Regaining Europe”, was published in April by Federal Trust. The opinions expressed are those of the author and not necessary those of Federal Union. May 2006.