The forthcoming referendum in Scotland

The forthcoming referendum in Scotland 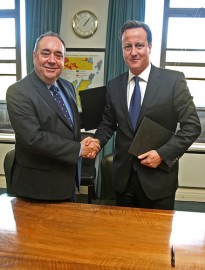 David Cameron and Alex Salmond agreed earlier this month the terms for the referendum on Scottish independence to be held in the autumn of 2014.  Federal Union has been asked what it thinks.

It would be outside the scope of this website to take view Yes or No – federalists could reasonably differ in their opinions – as long as certain conditions are met.

The first is that the decision is taken democratically.  There was some skirmishing over the wording of the question, and the attempt to have two alternatives to the status quo on the ballot paper and not just the single option of independence, and also debate about who should be eligible to vote.  EU citizens in Scotland?  Yes.  Scottish people in England?  No.

Secondly, and more importantly, there is the point about what happens to Scottish membership of the EU should Scotland vote to leave the UK.  Naturally, an independent Scotland that rejected EU membership too would be opposed by Federal Union, but that is not what the SNP is calling for. It is firmly in favour of the EU, and in the past few years was one of Britain’s most pro-European political parties.  It has blown with the trend of eurosceptic public opinion in recent times and it has been a cause of wry sadness to watch federalist friends active in the SNP explain – good news! – that an independent Scotland could avoid joining the euro.  (The treaty obligation to adopt the euro that is accepted by all new EU member states is in practice unenforceable should any member state decline to join, which is what Sweden has done.)

Federalism is traditionally understood as being opposed to nationalism, but the idea that Scotland should be a member state of the EU in its own right rather than part of the member state called the UK is hardly an example of the kind of nationalism to which federalism is opposed.  Scottish independence is better understood as a debate about the application of subsidiarity: what is the appropriate level for taking certain political decisions?  There is no particular reason for federalists to take sides.

There is no precedent for a new member state to be created within the EU, but Scotland is not the only place where this is being contemplated.  Think of Flanders or Catalonia, too.  So an important final point is what should happen to the rights of the citizens should Scotland vote for independence?

An independent Scotland would formally be required to join the EU afresh and sign an accession treaty (as it would with other international organisations such as the United Nations) but the EU is different from the UN in that it confers rights on its citizens.  Membership or not of the UN has not bearing on anyone from one day to the next, by contrast.  Can we imagine that Scottish people should cease to be European citizens for the period between Scottish independence from the UK and Scottish accession to the EU?  That seems wrong.

That implies that, should Scotland vote for independence, the process of accession to the EU should take place in parallel with process of leaving the UK and should be completed at the same time.  Both processes require negotiation between national governments and will only succeed on the basis of goodwill on all sides, but in the absence of such goodwill both the UK and the EU are doomed anyway.