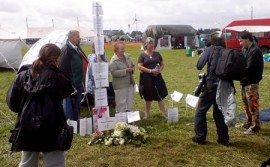 Other than the obvious question of whether or not anyone involved in Federal Union was actually a policeman in disguise, the story this week about the police officer who went deep undercover in the environmental movement for seven years tells us something about accountability.

Mark Kennedy, provided by the police with funds and a false identity, posed as an enthusiastic and helpful volunteer in campaigns against power stations and other installations implicated in climate change in order to gain information about who was doing what.  He was widely trusted among his fellow campaigners, some of whom even slept with him, and there is some shock and outrage when his deceit was discovered.

But why was the environmental movement targeted for infiltration in this way?  Millions of pounds and a whole team of officers were devoted to the operation, when there was little suggestion that terrorism or public order were at stake.  (One wag has suggested that going undercover in the newsroom of the News of the World might be a more likely place to unpick a criminal conspiracy.)

This blog is not the place to answer this question, but it is the place to say that there is a question to be answered.  The police need to be accountable for their actions.  This surely is common sense.

In which case, why do the eurosceptics object to the idea that the European Court of Justice should have jurisdiction over Europol?  In the EU, cooperation in the field of justice and home affairs started as an intergovernmental matter but has, treaty by treaty, become progressively incorporated into the mainstream of the EU.  Legislation in this area, for example, is now made using what the Lisbon treaty calls the “normal legislative procedure” (i.e. QMV in the Council and co-decision with the European Parliament), and the ECJ acquires a role in this area, too.

This latter point is controversial in Britain.  When the treaty was signed, it therefore included a special provision for Britain, in that the ECJ’s powers will apply only to new legislation (from which Britain can exempt itself) until 2014, at which point its powers will apply to existing legislation too.  This means that the UK has a deadline of 2013 to decide whether it will accept the jurisdiction of the ECJ over existing legislation to which it is party or whether it would prefer now to withdraw from that legislation too.

The Labour party, which was in government at the time, negotiated this special provision in order to reduce the controversy associated with the ratification of the Lisbon treaty: we do not know which way they would have jumped had they still been in government in 2013, and their manifesto for the election in 2010 is silent on the subject.

The coalition parties fought the election on diametrically conflicting policies – the Tories in favour of leaving, the Liberal Democrats in favour of staying in – and the coalition agreement itself merely states that these issues will be dealt with on a case by case basis.

Now, Europol does not have the normal powers of a police force – for example, it does not have undercover officers of its own – but nevertheless the case this week reinforces the notion that the police must themselves be accountable to the public.  The law applies to the law enforcers as much as to anyone else.  It is wrong that the activities of Europol should be outside that framework of accountability, and quite correct that the Lisbon treaty will bring Europol inside it.  This is the general view of most people in Europe.

For British eurosceptics, however, the calculation is different.  They don’t like the ECJ, and if that means that the British police have to be withdrawn from Europol, then so be it.  Their dislike of European law is so great that they would rather weaken our efforts to fight organised crime and terrorism.  Crazy, but true.  And it sheds new light on their professed obsession with national security: it is less important to them than their opposition to the EU.