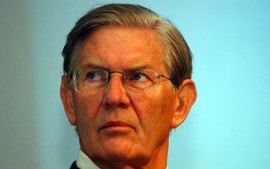 The debate on the European Union bill in the House of Commons yesterday focused on a clause that declares that the British parliament is still sovereign with respect to the European Union, and an amendment from veteran eurosceptic Bill Cash to make it tougher.  (Norman Tebbit has criticised the proposal: “It is a general rule of life that if a man in a pub declares loudly that he is stone cold sober, the odds are that he is drunk.”)  The debate was a very muddled and confused affair, which did not reveal much about the nature of national sovereignty within the European Union as a whole, but which nevertheless provides an interesting lesson.

The origin of the whole debate was the six point statement by David Cameron in November 2009, when he abandoned his commitment to a referendum on the Lisbon treaty.  As a sop to his backbenchers who were still demanding one, point 3 was a new law to establish that parliament was sovereign and that EU law had force in this country only because parliament had agreed that this should be so.  At the time, this blog compared this with a law to say that London was the capital of the United Kingdom: it is a fact which everybody already knows to be true and that restating in a law would change nothing.

Bill Cash, however, had other ideas.  He imagined that there should be a law asserting the right of parliament to overturn individual European laws, so that each and every EU law has force in this country only because parliament had agreed that this should be so.  He put it like this in the debate:

“if we thought it was in our national interests to do so, we could and should disapply EU law and require the judiciary to give effect to that law provided that it was clearly and expressly stated, whether or not it came from an international treaty or a European law.”

He imagines that it would be possible to pick and choose which European laws should apply in the UK, without jeopardising British membership of the EU altogether, and quotes examples from other countries where particular laws have not been enforced.  Such quotation is selective, of course: there are many examples where the European Commission has taken, and won, legal action to get such laws enforced throughout the Union.  Bill Cash’s approach would surely lead to a major crisis and British exit from the EU.  (This may well be what he intends.)

The coalition government does not want to go down the road that Bill Cash has suggested – thank heavens for the Liberal Democrats! – and, after yesterday’s vote was won 314 to 39, neither does the House of Commons.

But what does it mean to assert that parliament should be sovereign?  It may sound fine, but actually it isn’t.

One of Bill Cash’s backbench supporters, Andrew Bridgen, put it like this:

“Does the hon. Gentleman agree that the duty of every elected Member of the House of Commons is to defend and protect the sovereignty of this Parliament?”

To which a federalist would reply, no.  The duty of MPs is to protect and defend the interests of their constituents: sometimes, that might mean defending parliament, but on other times it might not.  There may be other parts of the political system that are better placed to serve the citizens than the House of Commons, and if so, they should be allowed to do so.  The only people who unambiguously benefit from a defence of the rights of parliament are MPs themselves.  Public reaction to the expenses scandal tells us that we have had enough special pleading from that quarter for a while.

In a historical context, John Redwood argued that:

“The Crown was sovereign once. It is intriguing that we are more than two hours into this debate but so far we have talked only about parliamentary sovereignty, even though the sovereignty technically still belongs to the Crown in Parliament. We all know about the events that took place over several hundred years, particularly when they were accelerated during the 17th century revolution and crisis. There was a large transfer of power from the Crown to Parliament. When a sufficiently large transfer of power takes place from someone who was sovereign to those who would be sovereign, a point is reached at which that sovereignty passes because enough power has been surrendered and the arrangements have changed sufficiently.”

And that transfer of power is happening again.  But power is moving not from parliament to the European Union, but from parliament to the citizen.  The power of the citizen can then be expressed through whichever political institution is best suited for each issue in hand, whether it is the House of Commons, the European Union, or the London Borough of Barnet.

But it is not only EU membership that exposes the hollowness of the doctrine of the sovereignty of parliament.  In the same debate, Chris Heaton-Harris observed that:

“Sensibly, Professor Adam Tomkins submitted in written evidence to us that “European Union law is far from being the only contemporary challenge to the doctrine of parliamentary sovereignty”.  That is a very salient point. Human rights law, and indeed common law itself, would also pose challenges, as would different types of law coming from different places through different courts.”

For a number of reasons, most of them good ones, the principle that what parliament says, goes, is no longer unbending.  International treaty obligations, including notably those of the European Union, plus many other home-grown concerns, combine to restrict what parliament may do.  Purists of the old school, as exemplified by Bill Cash, may dislike what has happened, but it is nevertheless the case.  Even leaving the EU would not restore parliamentary powers to their former glory.  What matters, though, are the rights of citizens, not the rights of MPs – do not confuse the two – and those rights are being strengthened.